A component-based distributed system, SoDA enables networked dance practice and computer-assisted choreography for virtual interaction between human and non-human performers (including third-party software such as Wekinator, INScore, MaxMSP, etc). Using SoDA, participants in a networked rehearsal receive aural and visual cues in the form of sounds, verbal cues, and visual displays that correlate to specific actions or movements. Cues regarding relative positioning and movement quality (direction, weight, speed and flow as per Laban movement theory) as well as pre-composed sequences or routines are communicated via webcam, microphone input, or shared video playback. Through such cues, the system fosters co-creation in a networked performance space as developed by the ongoing artistic research project “[Social D[ist]ancing: Development of a networked artistic practice out of confinement](SoDA - An application kit for networked dance performance · NIME 2021)” at the University of Music and Performing Arts Vienna, which is working to leverage ML and integrate computer capabilities within networked music and dance practices.

The SoDA kit consists of a set of applications that communicate through a custom message broker application (AMEX) in a remote server. SoDA works parallel to video conferencing applications (Jitsy, Zoom, etc) to annotate, document and enhance the performer’s experience. A SoDA Node exchanges and translates messages between SoDA components and third-party applications such as INScore (GRAME) or Wekinator (Rebecca Fiebrink). An optional SoDA Point of View (PoV) component monitors temporal communication parameters –latency, clock offset– relatively to a designated ‘central observer’, adding artificial delays where necessary to fine tune the perceived synchrony of actions at that particular node.

SoDA Nodes exchange messages via TCP protocol across the network, but communication between the Nodes and other SoDA components as well as third-party software —typically running alongside each other in the same machine— uses Open Sound Control (OSC) over UDP. This network design provides flexibility to the SoDA mesh, while having the advantage of being extremely scalable – the specifically conceived AMEX application running in the server allows for a large number of SoDA nodes to interact seamlessly in real time.

Additional SoDA components include SoD4L, a MaxForLive device that serves as a bridge between Ableton Live and the SoDA mesh, and SoDATA, a standalone application used for sequence recall and choreography annotation in different human-readable formats.

Using the SoDA kit enables dance practitioners to harness the immediacy and scalability of computer systems for artistic experimentation, and allows them to tap into the potential of AI in a networked, distributed environment.

Adrián Artacho is currently a PhD candidate at the University of Music and Performing Arts of Vienna, researching the use of technology to enhance performance capabilities. He is also an active performer of live electronics either solo or in different configurations. As a composer, his interest in cross-media projects and dance in particular has led him to regularly collaborate with choreographers and to become founder of the dance companies Tanz.Labor.Labyrinth and SyncLab Tanzkollektiv. (adrian@neuesatelier.org)

Oscar Medina Duarte has many years of experience working on technological projects in the safety-critical domain (aviation, railway, …). His great interest in the performing arts brought him to an active role at NeuesAtelier where he is active as a technologist and software developer. As a technologist, his main interest is on the effects of the pervasive tecnification of society and the role of performing arts in a post-pandemic world. (oscar@neuesatelier.org)

Here is a link to a video showcasing the use of the SoDA system by a team of artists-researchers in the context of the research project “Social D[ist]ancing: Development of a networked artistic practice out of confinement” at the University of Music and Performing Arts Vienna.

Here is the project public repository, including instructions for the installation and use of the Soda kit:

The authors would like to thank Hanne Pilgrim, Mariama Diagne, Benedikt Berner, Katharina Püschel, Dalma Sarnyai, Magdalena Eidenhammer, Maximilian Resch and Maria Solberger for their participation in the evaluation and testing of the applications. It was their invaluable feedback that ultimately informed the design of the software. This work is supported by the Artistic Research Center and the Research Support department of the University of Music and Performing Arts Vienna.

Objects within the META provide a live performance workflow for Ablenton Live. This environement is developed and mantained by Adrian Artacho.

The TesserAkt library is a collection of MaxForLive devices designed for real-time midi manipulation. These devices were developed in the context of the Fraktale Lab, within the artistic research project Atlas of Smooth Spaces (FWF 640) at the University of Music and Performing Arts Vienna.

This environement is developed and mantained by Adrian Artacho. The online repository can be found here:

This code repository also hosts the documentation and help files of the set of applications included in the Social Distancing Applications kit (SoDA), developed by Adrián Artacho. The standalone programs has been written in MaxMSP, while the message broker (AMEX) is C# programm written by Oscar Medina Duarte. The build standalone for the SoDA node can be downloaded here.

From the CNMAT package:

The SoDA ecosystem is composed by a network of SoDA node applications in addition to standalone components that add some features to the system. The local standalone components communicate by means of OSC messages with the SoDA node, and the individual nodes exchange messages via TCP protocol with the AMEX.md message broker application usually running in a remote server.

This are the instructions for the installation and use of the SoDA-node application. The installation process will be different between Mac and Windows operating systems.

The toolkit heavily relies on the MuBu lib developed by the ISMM team at IRCAM. This a Max/MSP library that is free (only to register to the IRCAM forum: http://forumnet.ircam.fr/product/mubu-en/.)

Note for Windows' users: you need to install Visual Studio 2015 Redistributable Package to have MuBu working! Once downloaded, add the Mubu library into the ext-libs folder within the GST.

Last step: in MaxMSP add all the toolkit to your file preferences:

→ (error) If your computer protests that the application is broken / corrupted / or from an unknown developer, you may solve with a little line in your computer Terminal:

Using the program is pretty straightforward. Once the remote server is on (which can also be done from the SoDA pov application),
hit connect button: 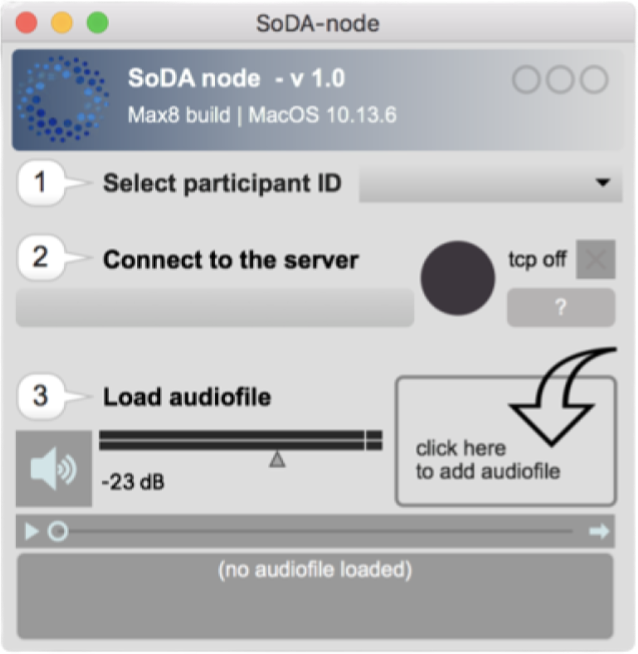 Then, the application should show the status "connected" and the toggle "tcp on". 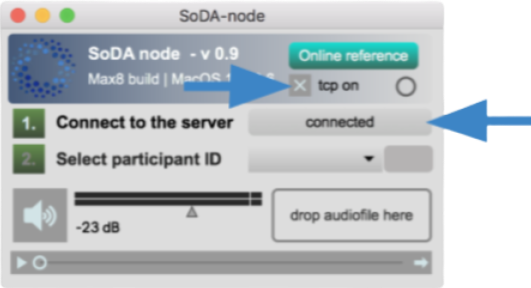 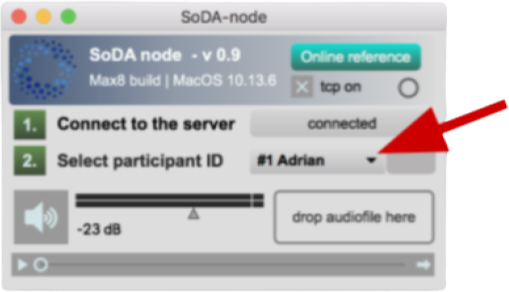 If we are going to use audio for the session, make sure to drop the audiofile (.wav, .mp3 etc.) in the rectangle on the right. 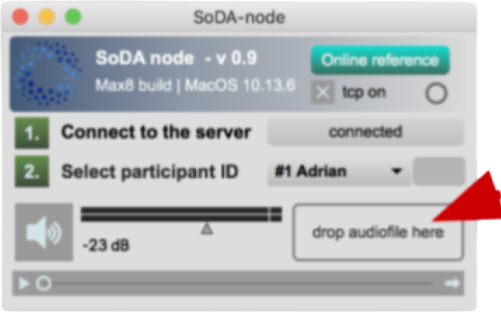 You will know that a connection is established with the POV application when your internal SID number appears near your Participant ID. You will also see a red blink at the top corner right whenever 'pinged' by the POV Application. 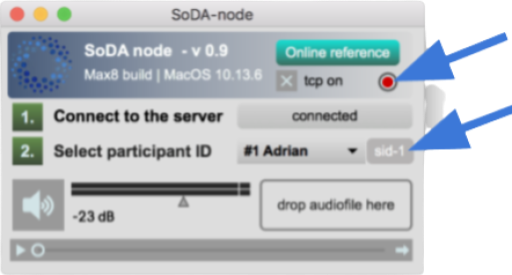 Set your volume level as you like with the horizontal slider, but make sure to leave the audio ON (the speaker symbol on the left) if we are going to be working with audio. 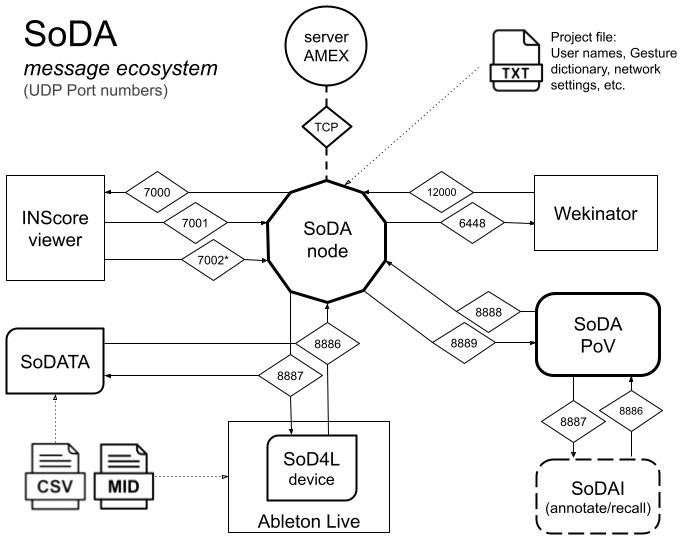 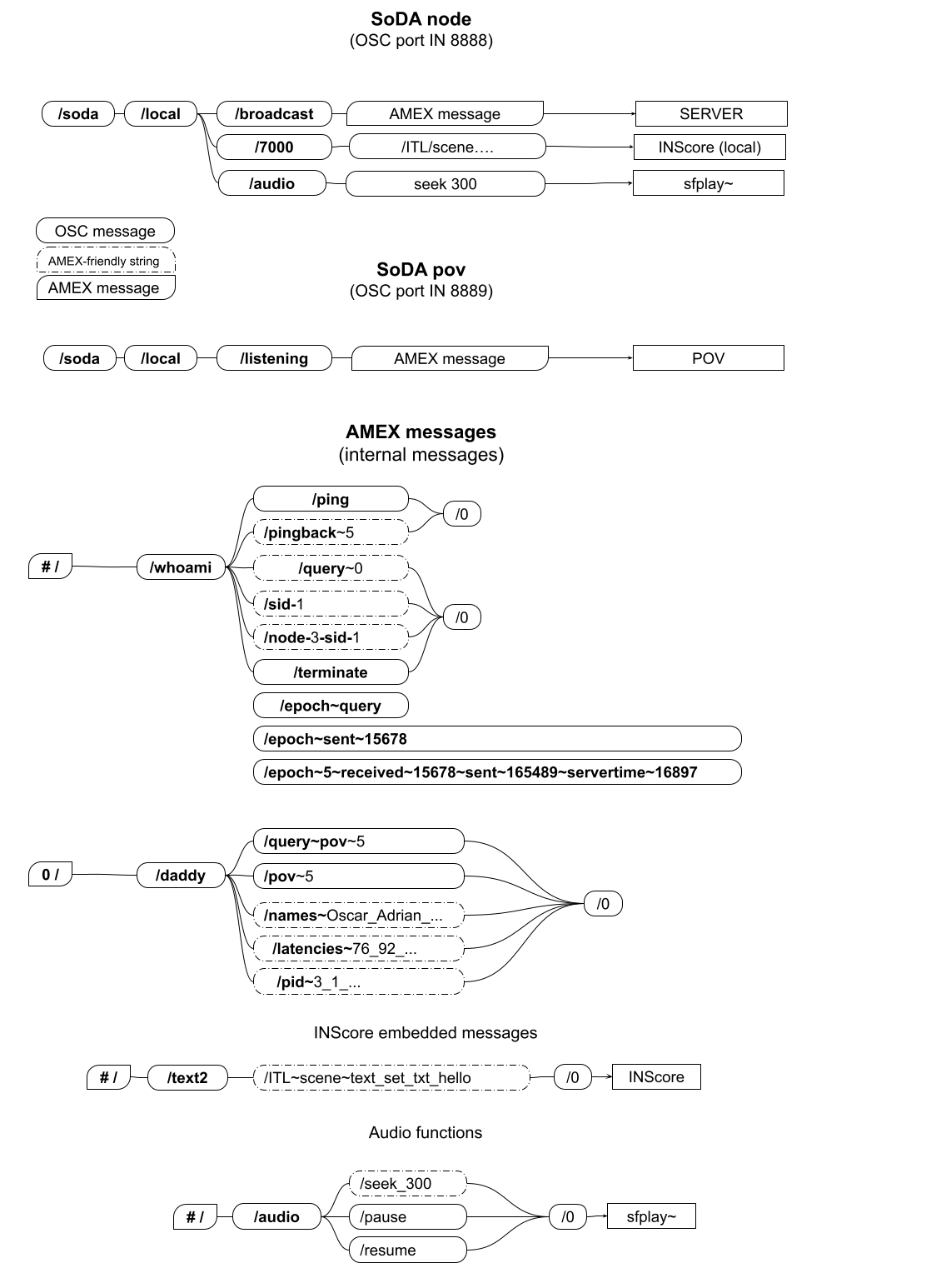 Here is the links to the live.device (OS-agnostic):

(*) In order to have polyphonic Pitch Bend, the Max For Live device needs to be used together with additional routing devices.

OSC messages to & from TransForms App

OSC messages from the PolytempoNetwork App to the TransForms App use the port 22574 and these are the ones implemented so far: 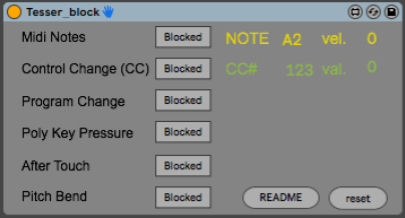 The settings can be stored with the device/set. They can also be automated.

This device is a derivative patch largely taken from AbletonDrummer's object.

This device is analogous to an autotune effect, only with midi. It takes midinotes and allows to substitute the entered midinote number and/or velocity with alternative CC values entered via CC86 and CC87. 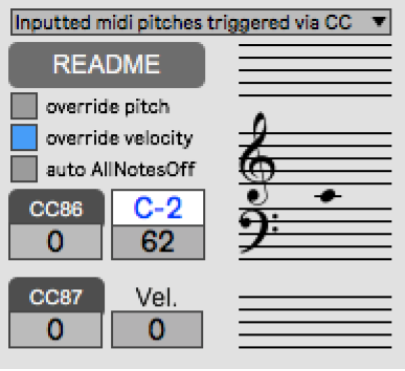 Here is a full description of the functions associated to CC messages within the TESSER environment.

override pitch The entered pitch will be substituted by the last entered CC86 value.

override velocity The entered velocity will be substituted by the ;ast entered CC87 value.

This device typically takes a CC as input and outputs a midinote. 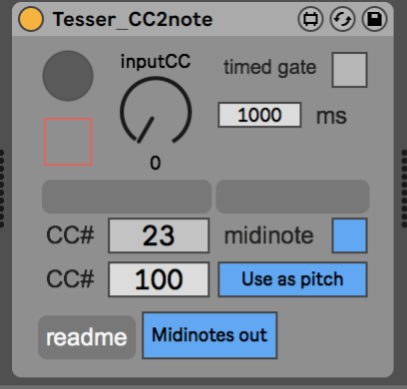